I think it was my father that instilled in me a love for books.  He was always reading one, and as a child I felt that I needed to be reading one as well.  I was particularly a fan of mysteries and the like, so I started out on some RL Stine in 3rd grade and then graduated to a little Christopher Pike.  Then came fifth grade and an old copy of a tale called Carrie.

Carrie is not my favorite Stephen King book, but it was the first he wrote and the first I read.  I remember the feeling I had afterwards, as though I could easily read another 100 pages if it existed, and all at once my love for Mr. Stephen King bloomed.

I read IT for the first time in 7th grade and have worked my way though five copies since, reading it more times than I remember, watching the covers bend and break.  Most recently I enjoyed it over the summer, in preparation for the movie that I anxiously awaited and hunted for previews of on a regular basis.  One Valentine’s Day, Mark forwent a bouquet of flowers and bought me a copy of The Stand instead, which is 1141 pages of perfection that would kick a dozen roses to the curb any day of the week.  I consumed the book, having already seen the mini-series and delighted by how close the book was to its portrayal.  I have loved Stephen King movies as long as I have loved his books, from seeing the Needful Things adaptation as a child to his awesome original mini-series Storm of the Century.

Sure, we’ve had our fights.  There was the ending to 2007s The Mist, which infuriated me, though I’m assuming that was a directorial choice, and of course 11/22/63, which sadly left me with a feeling of “what was the point?” (Though I did enjoy the miniseries.)   Still, I have stood by my Stephen.  Even when he detours into the realm of fantasy, which is not my genre of choice, I supported it.  When he wrote On Writing, it became one of my literary bibles.  I plucked it off the shelf for a re-read yesterday, which prompted this blog.

Reading has become difficult for me over the years due to bouts of retinopathy, an unfortunate side effect of diabetes.  I mostly find the print in many books to be too small now and prefer reading on my tablet even though I hate the idea of the electronic book replacing the paper one.  It angers me that I read slower now and getting through the first chapter made my eyes tired.  Still, I persist, because he once said (probably in On Writing, now that I think about it) that you have to keep reading.  In the same way that I am forcing myself to write even when I don’t want to, I have to force myself to read as well.  I haven’t done much reading in the past few years, and it is a hobby that I miss.

So of course, I look to the King to provide me with words to quench my thirst.  Aside from On Writing, I am planning on finishing Bazaar of Bad Dreams, which fortunately has some nice big letters in it to make the journey a little easier.  And I continue to write, because while I will never be the genius that is Stephen King, I write because I have to, because it is in my soul to do so.  I would never want to equal or surpass Mr. King, but it would be really cool if someday, somehow, he read something I wrote.  That would be more than enough. 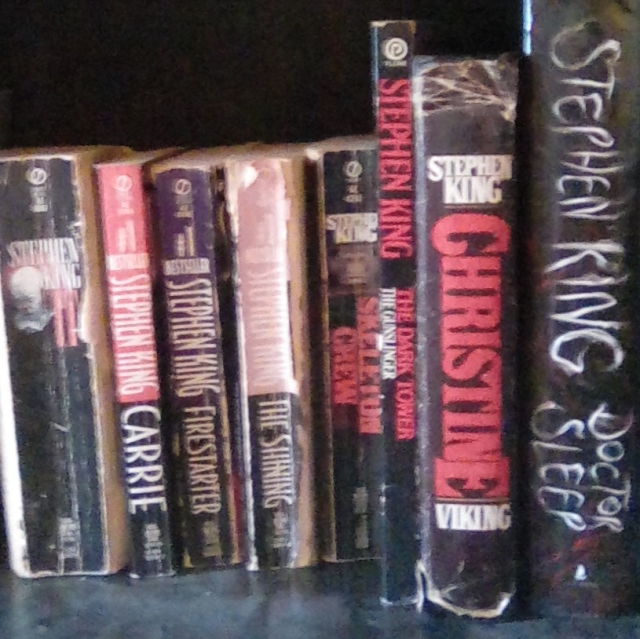 One thought on “Dear Stephen, A Love Letter to the King”