This weekend, I went out to the country.  We stayed with Mark’s brother at his house in St. Johnsville, NY.  He lives on a big rambling farm that would scare the shit out of any city girl like me, but I had a surprisingly good time.  First of all, I do enjoy playing in the mud, despite the aforementioned city-living. I was a girl scout growing up, and have never shied away from a camping trip, but there are many things about the great outdoors that amaze me.  For instance, shortly after we arrived Jay (Mark’s brother) took us up in his truck to see the land. I, with my minivan mindset, did not think this truck could make it up the steep and muddy hill Jay was heading towards. I was mistaken, as it took this impassable road with ease, and we sped along the fields with two dogs running alongside the truck.  The views were magnificent, and I wish I’d had my camera with me.

The next day we went fishing.  I have never been fishing, save one day many, many years ago when my uncle let me and my cousins watch him fish in the creek behind their house.  He caught a sunny and showed it to us, then threw it back. That was the extent of my fishing experience. Mark showed me the basics, and I stood there for a while with no bites.  Then we went to a different spot, where the fish were practically jumping out of the water, likely due to the torrential downpour we were caught in. I reeled one in and watched it flop its way through the water and then up my line. Mark took my picture (below) and then showed me how to take it off the hook.  Then, feeling triumphant, I watched as he broke its neck, and a little part of me died.

I mean, I knew the fish wasn’t going back.  They had already caught several that were chilling in a bag in the trunk.  To see it in that instant made me sad, however. I have an affinity for animals, and not just in an “I really like them” kind of way.  I feel a connection to them, sometimes more than I feel towards people. I’ve never met an animal that didn’t like me, and I have always been fascinated by them.  My favorite saint is St. Francis of Assisi, precisely because of his love of animals. So to watch that fish die made me melancholy, even though I know that of all the animals they are the most unaware.

However, I was also feeling very happy that I had caught a fish.  It was jarring to feel this juxtaposition between glee and grief. For the rest of the day I was proud I’d caught the fish, but sad it had to die.  Still, when asked if I wanted to go again, I said I did. I can see how it can be an attractive hobby, and I would like to try it again sometime. (Also Mark didn’t show me how to cast, and I would like to know that.)  So I guess in the end I’m not that sad about the fish. They’re still never gonna get this city girl out there hunting in the woods, so I guess this is a fine compromise. 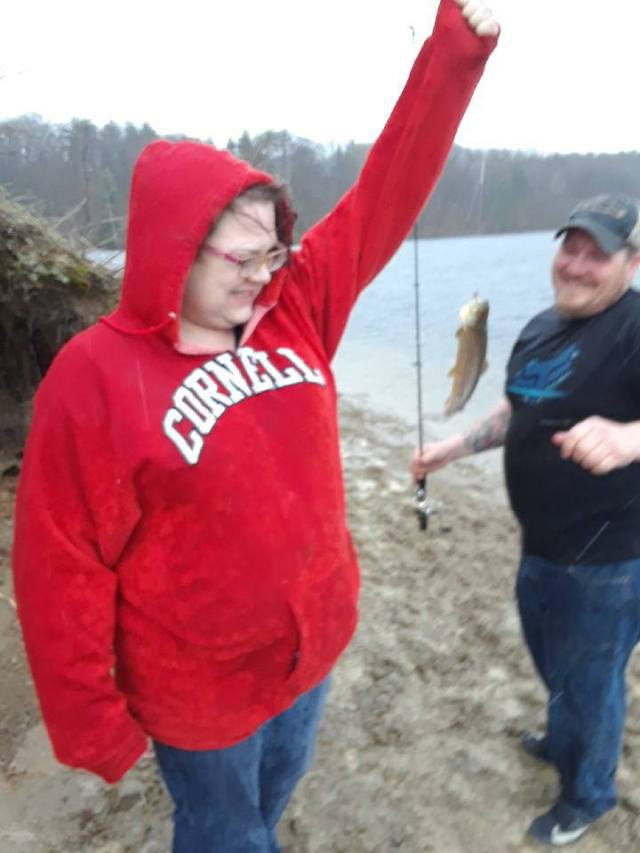