Yesterday I was starved for topics, but today one came to me over my morning coffee and daily social media scan.  It’s International Women’s Day!

As previously mentioned, I am a huge fan of women’s rights, being that I am one.  Now, I personally think that if you are also a woman, you should be as outraged as I am.  I do, however, understand if you are not.

No.  That’s a damn lie.  I do not understand that at all.

You know what?  Let’s not go here.  Let’s detour. Let’s stop screaming about injustice for a few minutes and celebrate instead.

I’ve never had many female friends, with the exception of a 4 year period when I was surrounded by females in high school.  Even then, I had a group of boys at the public school that I hung out with. I’ll be honest and say that I never really felt comfortable around the girls at school.  I was kind of a tomboy, and my best friend was Kevin, with whom I had spent literally my entire childhood. I’d always been more comfortable playing Ghostbusters than Barbie dolls.

Something happened in my 20s, however.  My female friends became more important to me, as the male ones sort of faded a bit.  When I got married, I had four of my favorite women beside me, and while Kevin stood mere feet away on Marks side, I realized that all my best friends were up there with me.  Mark, being the newest of them, and Kevin, being the oldest, but in between them…four amazing women.

If I can keep this blog going, I will likely mention them at some point, but I feel you should know them a little first.  Let’s go chronologically.

I met Beth when we were in Kindergarten.  She fell asleep on my shoulder during circle time, and somehow we were bonded for life.  Despite a falling out in 4th grade when she told her mom I broke her sisters toy, even though she did it.  Eventually she came clean and we’ve been good ever since. I have mostly forgiven her for the massive grounding my mother gave me over the incident.

When we were 18, Beth surprised me with the news that I was going to be a godmother.  This was deeply unexpected, but we spent the next 9 months planning and dreaming about what her baby would be like.  I was there the moment she was born, and it was truly a miracle. One little second of miracle, surrounded by like an hour and a half of gross.  But such is the circle of life. When Beth propped her up to take a look at me, and said “This is your Auntie Brig,” I obviously dissolved in tears.

I loved the crap out of that little baby girl, and still do.  D has grown into an amazing young woman whom I am proud to call my goddaughter.  Her sister came a few years later (and after Beth’s wedding to a great guy, which I missed because I was trapped in a subway car that was stuck under CIty Hall in NYC…you know what?  Another story for another day.)

We don’t see each other how we used to.  It used to be a five minute walk to her house, but now it’s a 25 minute drive.  Still, we get our kiddos together on occasion, and try to catch Shakespeare in the Park every year.  She has been there for me through everything, and has never stopped loving me, and has never made me doubt our friendship.  Her heart and compassion for others is truly astounding. I am so lucky to have travelled so long with such a great friend.

Next up we have Bernie.  Bernie burst on the scene on Halloween 1996 and totally screwed up the cushy only-child life that I’d had until then.  I will admit that at one point in my life, I resented a baby. Thing was, she was so small and fragile that I couldn’t help but also want to take care of her.  And I did. She was born with apnea and was hooked up to a monitor that beeped when she stopped breathing. When the alarm went off, my parents were supposed to go move her so she could breath better.  I don’t think those guys woke up ONCE. Almost every night I went into her room, adjusted her position until the alarm stopped, then went back to sleep. On her first Christmas, we fell down a flight of stairs.  She flew through the air as I hit every step on the way down, and I caught her at the bottom like a football. So really, I think my purpose on this planet is to continuously keep saving my sisters life. She dances with death a lot less now, but I hope she knows that I have always got her back.  Eventually my resent melted into fondness, which in turn became a love so fierce that I’m pretty sure it’s up there with how a mother feels about her child. I love my stepkids fiercely…I love Bernie even more than that. Perhaps it’s because I was a teenager when she was born, and was intrical in her upbringing.  Whatever it is, I’m so happy that it replaced that terribly jealousy that only a 13-year-old can muster. Bernie is my soft spot. She’s the chink in my armor where the arrow can pierce through. Try it. Say shit about my sister, I dare you.

She’s also the one who can calm me down best, and who loves me most, I think.  I love her most, too.

Jaime and I met in Sr. Donna’s freshman homeroom in 1997.  We both wore glasses and had an affinity for Aussie Ts. Because of this, Sr. Donna spent the next four years confusing us, which made for some hilarious situations.  I still remember the first time I called Jaime’s house. The anticipation of calling a new friend back then was almost as rough as the anticipation of calling your crush.  There was no texting, which would have been easier, just the fear of awkward silences and stalled conversations. Of course…that didn’t happen. We talked for two hours.  And again the next day. And then literally every day until texting was standard and we both had cell phones. We would sit on the phone watching Lifetime movies and rehashing our days, even though we just saw each other at school earlier.  Our conversation started in 1997, and hasn’t ended yet. Jaime is the friend that tells me like it is, but in a way that I appreciate. She’s also always been one to let me make my own mistakes. Take Mark. I know damn well she was concerned when we started dating again, but she stood by my decision and then ended up Maid of Honor at our wedding.  She always gives me good advice, and is always rooting for me, which is something I appreciate. Most of my memories of my teens and 20’s involve Jaime, and while we don’t hang out as much as we used to, I know I can text her any time and ask if she wants to go get ice cream and talk about things that annoy us. She is my rock, and I love her.

Lastly, Sahar.  Sahar and I met when we were 16.  We were both members of an Explorer Post that operated out of the New Phoenix Theater (someday I’ll write about my love of theater, and this place will feature prominently, but not today.)  She was different from most people I knew, mostly as she was the first Arab Muslim I had ever met. I had lived in a fairly white bread world, key word being white, and while I harbored no prejudices, I found her to be somewhat exotic as opposed to my other friends.  We were doing a play together, and she was the stage manager. I was the director. It was inevitable we would become joined at the hip, but it went farther than that. We developed a fast and strong friendship that is just as strong today as it was 17 years ago. She is the stage manager of my life.  She is my best sounding board and on top of that, my only real writer friend. We can talk about our lives as well as our writers block. We’ve stood together during all the dark times in our lives, and have remained friends during huge gaps of being out of touch, and now her being several states away and expecting her second baby.  Still, when she is here, I am 16 again, and we are laughing and dreaming how we always did. She’s like a human Xanax. She calms the storms and brings in the light, and I love her for it.

There are many other amazing women in my life.  Some I’m related to, like my aunts and cousins and of course, my mother, who will get her own blog entry sometime down the road.  Some I knew back in that school full of girls that made me uncomfortable-Chelsea, Molly, Jen, Christina…I may see them hardly ever, but I am always rooting for them.  My step daughters, E and K, who are women-in-training and make me proud all the time.

Sometimes, we forget that. 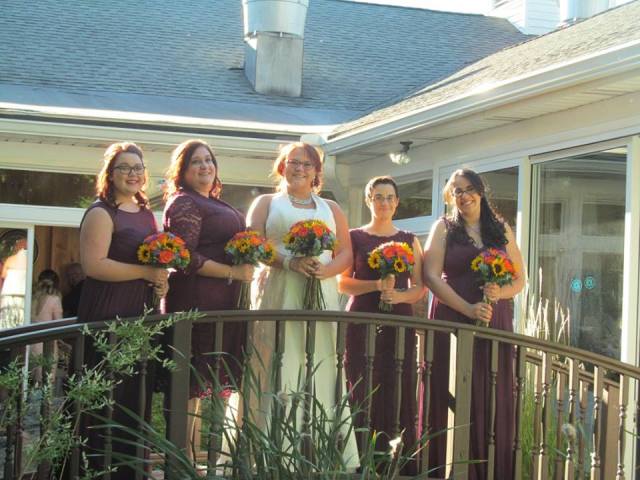 All proceeds will go back into writing expenses, and also coffee.

Or enter a custom amount

Your contribution is appreciated.
Like...you don't even realize how much.